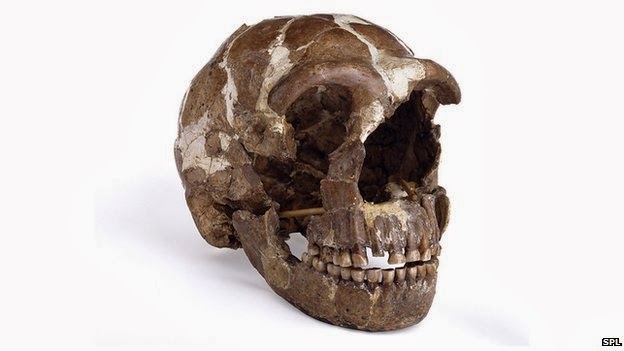 New DNA studies are being published all the time and the latest have been highlighted in the press - with the journalists looking for short term headlines and missing the main lesson.  The headline relates to the identification of Neanderthal DNA in non-African humans - and the fact that it appears to be related to Chrone's disease, diabetes, etc. Perhaps the best popular account is by the BBC.

Some accounts briefly mention the fact that the genes that have been retained are not randomly distributed but are mainly related to the skin and hair. These are areas which could be connected with living in a colder climate, helping the sapiens newcomers from Africa to more rapidly adapt to the colder European climate.

What none of the popular accounts say is that this represents an important piece of evidence about human evolution. It demonstrates that when two human sub-species interbreed evolution among the offspring can select the most useful features of both species. And if it has been proved to happen once it probably happened many times. There is already evidence of interbreeding with the Denisovans and other as yet unidentified subspecies (at least as fossil remain have been located). I suspect more relevant papers will appear in the not too distant future.

If we consider the environmental changes over the last 3-4 million years there have been numerous changes in the environment in Africa, which means changes affecting both large scale and small scale environmental niches. There will also have been a number of "shock and awe" environmental disasters caused by super volcanoes disrupting the food chain. Faced with such challenges a species with a degree of intelligence and a simple but effective culture which includes primitive tool making is likely to split into groups which move into different ecological niches. Some might be pursuit hunters of larger animals, some might trap fish in rivers, while others subsist on shell fish in the sea. Some may make more use of tools while others might make more use of vocal calls to communicate while hunting. The case of Darwin's finches - where one species has split into a number which exploit different food sources is well known. Something similar seems to be happening with the orca - where different pods around the world use very different hunting techniques, which are undoubtedly culturally related in what is clearly a very intelligent species.

If the "tribes" of early hominins remain separated for long enough each will start to evolve changes which suit their chosen niche, and the most successful will survive. When interbreeding occurs the "hybrid" next generation will combine features from both parents, and over the following generations the best combination of features will be selected - as we now know happened when modern man met up with Neanderthals. Such splitting and recombining would allow different features to develop in parallel - and also provide a test bed where some features,  present in some fossil species, could be tried out and found wanting.

If we assume that human subspecies can still interbreed with some success after being separated an average of a quarter of a million years this allows a dozen iterations in the last three million years, with Homo sapiens being a particularly successful hybrid about 200,000 years ago.
Posted by Chris Reynolds at 17:03