Dogs have owners - Cats have staff

During some online discussions on the Futurelearn Environmental Humanities: Remaking Nature course the question of domestication of animals came up and the difference between the domestic dog which we have domesticated, and the "parasite" cats which have domesticated us.

Lesley mentioned seeing a T shirt that summarised the position nicely and I have tracked down where it may be purchased.

Posted by Chris Reynolds at 05:59 2 comments: Links to this post

Direct Computer Links with the Brain

Brian has drawn my attention to an article DARPA's Neural Interface Will Let Brains And Computers "Communicate" which raises some interesting points  as does the recent BBC news item about bionic implants in the eye and other work using nerve signals to help control artificial limbs.

The problem is that the interfaces are crude and it would seem that they work a bit like braille. For instance the brain interface uses the word "communicate" in quotes and describes the process thus:

Up to 100 implants or “channels,” each connected to tens of thousands of neurons, are able to record and encode information that a computer can recognize as representing specific neurological activity. However, this data is full of “noise,” and is frequently inaccurate. 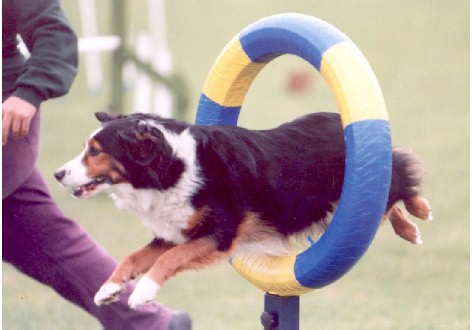 In my studies into the evolution of human intelligence it is becoming increasingly clear that the main difference between us and other mammals is that we have invented a tool called language which enables parents to teach their children a significant amount of cultural information. Better knowledge means better chances of survival. However in other respects animal brains work in basically the same way and you can expect them to have similar emotions.

Two pieces of recent research have caught my eye relating to dogs. One relates to their domestication and the other to their ability to recognise human emotions.

The idea that wolves found scavenging human sites, and some became non-aggressive, to the point of eventual domestication seems even more likely when it is realised that wolves seem to be developing a similar friendly relationship with geleda monkeys.

The fact that we share emotions with dogs and there can be recognised both way across species suggests a kind of symbiotic relationship. Another factor which suggests a similarity between dog and human brains is the extent that dogs can be taught to carry out a range of useful activities. Because they do not have anything like human language wolves are limited in what they can teach their young. But humans have evolved to be very good teachers of human children - and dogs respond when positively taught in the same way.
Posted by Chris Reynolds at 16:26 3 comments: Links to this post

What explains the Rise of Humans

Why is language so important when discussing the reasons why humans are different to chimpanzees? This TED talk suggests that the difference is because we can work together in large groups by mutually agreeing fictional stories about the world. I like it and I think you will too.

Posted by Chris Reynolds at 09:03 No comments: Links to this post

To Live and Die for the Table

I have recently been involved in discussions about nature and the environment which drifted into the treatment of farm animals.  In 1990 I wrote a piece for the New Scientist called "To live, and die, for the table" and for many years it was on the open pages of the New Scientist as an example of the kinds of controversial article that appeared in its opinion pages. When I came to link to it I found that copy had been removed  - so here is a copy of the original page. 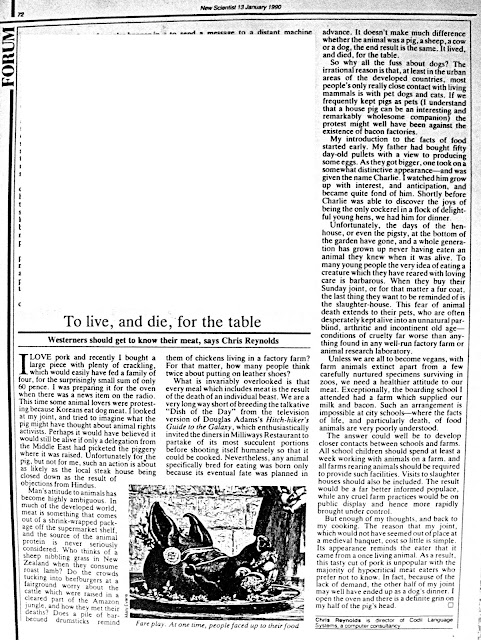 Posted by Chris Reynolds at 20:18 No comments: Links to this post

“Is there an evolutionary explanation as to why some groups seem more particularly prone to take life and give their own lives in defense of their religion?”

I submitted the following response, in line with the evolutionary model of human intelligence I am developing on this blog.
Read more »
Posted by Chris Reynolds at 15:18 No comments: Links to this post