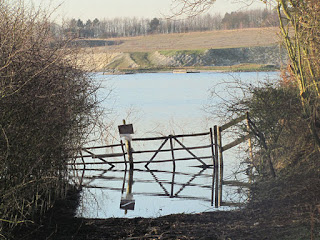 In March last year I posted this picture (A Rainfall Crisis looming in Eastern England) which was actually chosen to show how low the water had got in the College Lake Nature Reserve near Tring! College Lake is actually a disused chalk pit and when quarrying was abandoned it was estimated that that water entering the lake would seep away through the chalk. The calculations as to the equilibrium level were badly wrong and the water rose to flood the track through this gateway some years ago. However they had seem to stabilize and during the drought of 2011 and early 2012 the water actually dropped to revel about an extra foot of this gate. 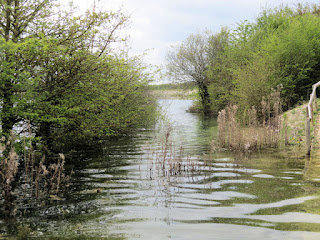 Unfortunately the weather has been very wet since then and earlier this month I took the photograph on the right from exactly the same spot, only this time using a wide angled shot rather than a zoom. The gate and the adjoining fence have completely disappeared and not even the top of the notice board is visible. In the first shot two low islands, Big Paddy and Little Paddy, can be seen at the foot of the cliff. At the time the later shot was taken Little Paddy had vanished and Big Paddy had almost gone, disappearing completely a few days later. 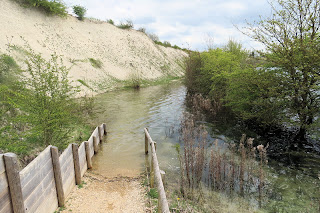 In fact the water had risen further than the above picture suggests. It was taken standing almost knee deep at the bottom of the slop - looking towards the bottom right corner, where the earlier track had been.

[I post additional Rural Relaxation shots on my other blog.]
Posted by Chris Reynolds at 09:00