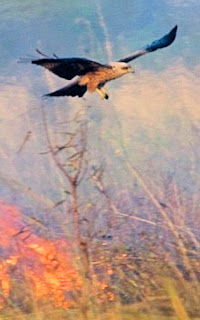 
Bushfires caused by lightning are common in parts of Australia and many of the plants have evolve to find ways to survive - in some cases having seeds which are released onto the newly burnt ground after the fire has passed. Reptiles, frogs and insects escaping from the flames can easily be caught by birds attracted to the fire, including kites. When the Aborigines arrived in Australia they found that controlled starting of fires could make hunting game easier.

When Europeans arrived they brought conventional agriculture and fixed houses, which did not fit in well with regular burning of the landscape and they introduced fire breaks to stop fires spreading. Bob Gosford has been investigating cases where fires have "jumped" over firebreaks into unburnt grassland on the other side - and has discovered that in some cases this has been cause by black kites taking a burning ember from the burning area and dropping it into unburnt grass may be hundreds of yards away.

In fact it would seem that the Aborigines have known this all along and the detailed article "Firehawks of the Top End" gives details from the native folklaw. The article has also attracted a number of comments from people with relevant observations including the suggestion that in some cases the action may hay been accidental. The evidence seems clear that kites can and do sometimes carry burning sticks - but whether it is deliberate or whether when trying to catch a lizard their claws actually grasps a stick which they flew off with, dropping it when they realised they had made a mistake.

All very interesting - but to me the case is not proven that the kites deliberately picked up the stick and deliberately dropped it where it would start a new fire.

Bushfires caused by lightening are common in Australia and Bob Gosford has been
Posted by Chris Reynolds at 11:57