Why Dartington was Different - No need for Sexting .... 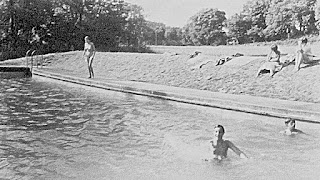 
An article recently appeared on the Dartington Hall School pages which had been written in French 'Life in the Sun' by a young English woman attached to UNESCO and a member of the 'Sun Club'. She recalls her life in a progressive school in England, where there is no equivalent in France.

I started being a naturist at school - that's surprising, and even more so when you learn that the school is located in England; anyway it's because I was there that I became a naturist. The school was in the middle of a private estate in the county of Devon, a couple hundred kilometres from London and it was called Dartington Hall.
The goal of the Headmaster is to have girls and boys used to living together from a young age without worrying that a girl wore a skirt and a boy wore trousers. (Anyway as there was no uniform, most of the girls often wore trousers as well.)
To reach this goal, and also evidently for the physical benefits that were gained, we practiced full nudism in and around the swimming pool. I have to admit that the first time I went in the pool, it appeared funny to see all these pupils, aged from four to 18, swimming and sun-bathing naked and I had not taken off my costume. But the fact that I was 'dressed' didn't give rise to any comments and the second time I went I was completely undressed without a second thought.
During my time at Dartington Hall, I saw the same hesitation in each new pupil. But the modesty stage did not last more than five or six days.
In principle, the Headmaster did not like to take pupils as old I was myself. (When I arrived I was 14). But owing to the War, he made some exceptions.
It wasn't only for naturism that the school was remarkable, but also for all its aspects. We were completely free, apart from rules about hygiene and health - bedtime, monitoring the swimming pool etc... From the point of view of studies, with no disciplinary actions or punishment, corporal or other, all the pupils who had the smallest urge to work and to succeed received full encouragement. And often, even the laziest pupils when they found themselves in class could not bear that a fellow pupil of the opposite sex did better. That was the case for me.
We had all the facilities to practice every pastime - a workshop, a print shop, a large library, ping-pong tables, tennis courts etc...
When we had had enough of our friends, we could go to the bedroom which was a sanctuary, where nobody had the right of entry without being invited.
I hope I have given you a glimpse of this school. If ever you find yourself in the West of England, I would advise you to pay a visit and, if possible, to go and talk with the Headmaster, W. Curry.

The school still being run in the same way when I was there between 1952 and 1956, and it is clear from recent conversations that my generation, who didn't go to Dartington, remember it because they assumed that nude bathing meant decadence..
But it wasn't like that at all. I must admit that, like the above writer, I initially found the idea strange - having been brought up conventionally to believe that the human body needs to be covered up, but I soon relaxed, and took it for granted.
I had a camera at school and possibly took about 100 pictures when I was there (no digital cameras then - so every picture I took had to be paid for out of my pocket money). I have just looked through them and the picture at the top of the post is the "naughtiest" one in the collection. Yes - the girl in the distance isn't wearing anything = and neither are the boys - although the water hides their "naughty" parts.
So why didn't I take any more sexy pictures I hear you ask. After all the talk today is about children at school sexting - exchanging pictures of themselves naked. Surely when it was so easy to take a picture of a girl naked you would have done so. But why? When you can see naked breasts and public hair at the swimming pool any day in the summer you treat it as everyday as you would treat school uniform at a conventional school. Its not naughty - its not sexy - if anything it is boring!
What was sexy were the girls who wore costumes and who tried to change on the bank beside the pool under a towel. What had they got to hide???? The whole problem of modern sexting is that our society has set up taboos which only succeed in making what is hidden more desirable - with all the excitement of associated with breaking those taboos. Remove the taboo and all the excitement is gone.
Posted by Chris Reynolds at 08:22