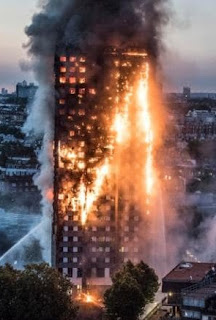 I am sure that I am not the only person who has had nightmares after this horrific event - and am reminded of an earlier disastrous fire in which burning plastic made in the town where I live resulted in 55 deaths. As our M.P., David Gaulke, was only 2 years old when it happened I decided to write to him to remind him of the earlier event, caused by plastic made in his constituency:-

I am sure your, like everyone else, is horrified at the Grenfell flats fire and will have sympathy with everyone affected by the fire. The immediate issue is to stop jerry-building with inflammable materials as soon as possible. However it is very important that no stone remains unturned to identify the weaknesses in the system of  building regulations and ensure that they are properly enforced.

I am writing to make you aware that there will be a number of people living in the North West of your constituency who have particular reasons to be horrified at the Government’s failure to being in adequate building regulations relating to the use of inflammable materials in building construction, and in particular in keeping the regulations up to date as technology changes. 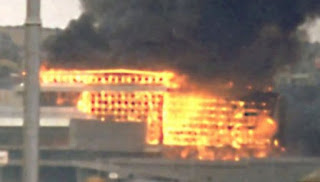 You are clearly too young to remember the Summerland fire at Douglas, IOM, in 1973 when 55 people died. Many deaths and injuries were caused because, to allow light into the entertainment centre, the roof was made of large plastic panels. The fire spread to the roof which melted - showering the people below with drops of blazing plastic. These panels had been made by a company called Williaam Cox, which was then based in Tring - their factory having now been replaced by Tring's Tesco store. Obviously Tring people who worked in the factory will be particularly distressed when they learnt of the death and destruction their product had caused.

There were a lot of lessons learnt from this fire - not only relating to the use of fire-resistant building materials, but to other issues (some of the people died because fire-doors were locked). While I am not sure of the administrative details I am certain existing building regulations reflect many of the lessons learnt from the Summerland fire.

While I am sure the planned inquiry will look into the fine details the clear evidence of the Grenfell fire is that the tower block had been encased in a box of quite obviously inflammable material. It is also clear that the problem of inflammable cladding (professional jerry-building) has affected many other buildings because the Government failed to act quickly. The tragedy may have roots in the financial pressures on local government,  the low priority put on social housing, and changes in the way regulations are monitored and enforced.

The recent BBC report on the relevant building regulations http://www.bbc.co.uk/news/uk-40418266 is a horrifying account of how a laisez faire approach to how building regulations are enforced. The way in which regulations can be ignored seem to be designed to allow builders to pass the buck (and ignore responsibility) allowing them to maximise profits by ignoring the inadequately defined, poorly monitored and incompetently enforced regulations.

In this context I am therefore very disappointed by your earlier interview on TV where you tried to explain away the Government delays in updateing the regulations. An honest reply to the question would be to say that "While I don't believe the deaths were caused by the delays I would be happy for the full inquiry to consider whether there should be far better mechanim for rapidly drawing up and enforcing regulations."

There is absolutely nothing to fear from such a statement if the Government policy has been in the interests of the public. If mistakes have been made AT ANY LEVEL (and everyone makes mistakes, even Governments) these must be clearly identified and any attempt by the Government to inappropriately pass the buck is simply saying that the deaths of the people in Grenfell tower was in vain.

The issue is of particular relevance in terms of Brexit, where there is a question over the regulations which have previously be set by EU professional experts (not politicians who are amateurs in the relevant specialities). Can you assure me that when changes are made all revised regulation will put the interests and safety of the public of the highest priority and will be properly enforced – unlike the building regulations that were so loose that 79 people died.