Is Language the key to understanding human intelligence? 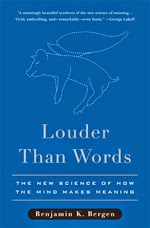 In my previous post I referred to a paper with a title that ended with the words “Modern Human SuperiorityComplex” and these words were at the back of my mind in reading the book “Louder than Words” by Benjamin Bergan. I am currently drafting a paper on my evolutionary approach to a symbolic language to explain how the brain processes information and I decided to read this book to help me clarify where my ideas fit with recent cognitive science research and where there are discordances which I need to address in my paper.

While I found much to think I felt that that more experiments were described than was actually necessary as for me they carried similar messages. For instance many involved exposing the subjects to a certain situation and observed that they were better (faster, more accurate, etc.) in recognising following stimuli that related to the pre-test context. But of course this was something which, from a very different angle, was familiar to me. After all my original research language was called CODIL – Context Dependant Information Language because I considered that context was the key to mutual understanding between humans and computers. On the other hand many of the book’s examples related to visual imagery while my CODIL research had been text oriented and it was reassuring to realise the same context related rules applied.

There were some useful examples to help visualise what is going on in the brain and how different people perceive the world in different way. For instance I had never thought that there were too very different ways of visualizing a flying pig– perhaps because I never read Superman comics!

However reading the book made me think about the role of language and "modern human superiority complex". Clearly our language is something pretty remarkable that distinguishes us from other animals. Without it we could not have, for example, the book Bergen had written, and the many experiments he carried out would not have been possible. Studying language tells us a lot about human thought, and allows us to look, to a certain extent, into the minds of others. It therefore seems obvious that by studying language we can understand why our brain does what it does, and how it works. A considerable amount of good quality observational research had been done, some of which is recorded in the book. In effect much of Bergan’s approach, shared by the majority of cognitive scientists, is that understanding language is the key to understanding the brain, its unique features which make us superior.

However there is a problem in fitting all these findings into place, and one of the difficulties is that there are no language fossils – and no living intermediate forms – to suggest how the brain and language evolved together. The current situation in cognitive science is rather like the study of evolution before DNA was discovered and it clear that Bergan realises there is much to do when he says:

Of course I do not claim to know all the answers, far from it, but I would suggest that an evolutionary approach is far more likely to provide a satisfactory model. Rather than trying to dig our way down to a solution by examining language on the assumption that we are very intelligent we start by assuming that because we are animals our brain works in exactly the same way as other animals. Language is merely a Johnny come lately add-on, which has grown and grown until it appears that the tail is wagging the dog! My starting point is to realise that the natural way of thinking will be using a model that fits naturally onto a neural net where thoughts exist in parallel. In order to transfer information from one brain to another humans use a sequential string of words – which involves coding our thoughts when we speak and then decoding words when we listen. Natural language grammar can then be seen as little more than mutually agreed shorthand to simplify the transfer, rather than an inbuilt part of the brain’s thinking mechanism.

So while I may not agree the direction that Bergen and many other cognitive scientists have taken I have found the book helpful in planning how to improve the draft of my paper on the evolution of human intelligence.
Posted by Chris Reynolds at 16:35