To list the file in the CODIL default format he types in a simple command and the system responds immediately:

Further statements can be added by using CREATE(APPEND) or the file can be edited. In the following example the context editor is used to change all occurrences of DIAGNOSIS = MI to DIAGNOSIS = MYOCARDIAL INFARCT.

In practice this degree of flexibility is inappropriate for non-trivial files which are to be updated over a period of several years and used by more than one individual. There are also advantages in minimising the volume of batch punching and interactive input while continuing to use meaningful terminology. For this reason the hospital files were initialised as follows:
(a) Abbreviations. To avoid the need to type in long names a number of abbreviat ions were defined as follows:

New names and/or abbreviations can be defined on any subsequent occasion. However to prevent the accidental use of an undeclared name it is possible to indicate that such names are to be reported or rejected.
(b) Semi formatted input. It was agreed at an early stage in the work that all patient information should be qualified by a serial number unique to the trial and that no names or hospital identity codes should be used to ensure confidentiality. In addition all statements were to contain date and time information to an appropriate degree of detail, together with a "form name" to identify the type of information being input. To handle this a simple routine is created to read in details of the NEXT patient:

This file is used to read data off the form shown in figure 1, which is punched for batch input as follows:

(The ":E" termination is not shown on the form as the actual routine NEXT used in the operation system has been written to minimise punching. The routine can also be used in interactive mode, in which case it will automatically prompt the user for the inputs required.)
(c) Updating the master file. New information is currently made available in batch mode and it would be inappropriate to add it directly to the file of accumulated patient data until there had been an opportunity of removing any data preparation errors, etc. To handle this problem an additional routine READ NEW DATA has been written which copies the input data to a file called NEW DATA, which can be edited, amended, searched for errors, etc. Once this file is free from errors it is merged with the master file. It is worth noting that the biggest part of the initialisation process is the list of abbreviations used by the doctor.
4.2 File listing facilities.
In addition to the default file listing facility - which can be bulky for large files - it is simple for the user to write his own routines for controlling the way in which information is printed. The following example involves the creation and use of the file, LIST PATIENTS, and shows some of the tabulation and other facilities available for controlling the layout of the printed page. 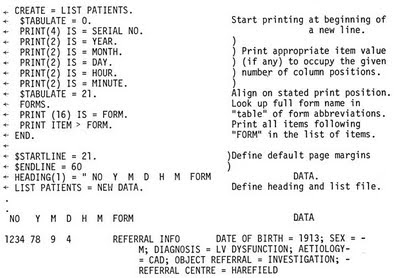 Although not shown in this example the CODIL interpreter automatically adjusts for undefined or mu1tiva1ued information with the minimum of user inconvenience.
4.3 File searching facilities.
Files are searched by comparing a pair of files. The first contains the definition of the search and the second the information to be searched. The following example prints out a list of all the patients who have died according to the file PATIENT FILE.

Queries can involve several different items of information. For instance the next example looks at all patients referred for investigation to Brompton or Harefield hospitals where the diagnosis included the word ANGINA. Information on the patient's serial no. sex, and age are printed.

Questions involving several different events in the patient's history need to be formulated more carefully as the information is held in patient/date/time order and there is no limit to the number of statements about anyone patient. Some­ times this can be done by using an additional item to indicate that an earlier event has been noted relevant to the enquiry. In this case the item BROMPTON PATIENT is used to hold the serial number of the last patient referred to Brompton in 1973. This is used to select such patients who were seen at a follow up session in 1977.

Complex questions are best asked by using files as conditions of indexes. For instance in the last example the result could have been stored as a list of serial numbers on a file called BROMPTON F U 77 rather than being printed out. This file could then be used to identify such patients immediately on any subsequent occasion. This can be done for any category that the user finds useful. Given files such as ANGINA PATIENTS, BUGGINS PATIENTS and SURVIVED 5 YRS, and  using the experimental indexing facility, it is possible to list out all clinical information on Buggin's patients who suffer from angina who have survived for a period of 5 years.

The effect of using files in this way is analogous to a user being allowed to set up indexes on any items, or combinations of items, that he feels would be useful.
4.4 Data vetting.
The flexible nature of CODIL means that there is inherently less control over the format and structure of the information being stored as compared with a more conventional data base system. For areas of the application where the user requires more control over the structure and content of the information being processed there are a number of optional facilities. In addition the user can write his own checking routines. This account will restrict itself to two different approaches.
The first is a CODIL library routine, MAKE CHECK LIST. This scans through a file and extracts all items with a given name, cross referenced by the key item, which for this application happens to be the patient number. The result is an alphabetical list of values, with appropriate references to the patients. By scanning this list the doctor can quickly see the terms used in the systems, spot unintended synonyms, etc. He can then use the results to amend the master file or to chose suitable phrases for use in a search query. MAKE CHECK LIST can also produce a file containing all the valid values of the given item and this can be used to check whether a newly input item has a novel value or not.
The second approach can be considered as an extension of the file searching techniques used earlier, except that the files being used contain valid items or lists of items. For instance there might be a file called NORMAL REFERRALS that links the surgeon's name with the appropriate hospital.

Given a file that contains the data checking appropriate to the input the above file could be used in one of two ways. Embedded in a statement such as:

it will produce an error message whenever a referral form does not contain a valid surgeon/referral centre combination. Alternatively the user might want to do no more than record the name of the surgeon, leaving the CODIL system to add the referral centre. This can be done using a statement as follows:

This will cause the appropriate referral centre to be added to the statement being examined.
5. Future plans with the Cardiac Information System
Despite the lack of a terminal at the hospital the system is operating in a satisfactory manner and currently holds details of some 500 or so patients. The next stage is to give the hospital staff unsupervised hands on experience by providing a terminal in the hospital. It is hoped to do this later this year and it will be initially used for file interrogation activities, switching to file update a few months later. Associated with the change over will be a switch from sequential to indexed files and the introduction of improved data vetting facilities under the control of the doctors.
In making these plans due note has been taken of other trials using the CODIL language. One of these involves the processing of the weekly job statistics for the University Computer Science Department. This has proved the ability of the language to handle comparatively routine tasks peaking at about 1000 transactions a week. Another application is built round a data base of genealogical information on about 1400 individuals - which contains poorly structured biographical information with the need to generate family trees, etc. This has proved invaluable in examining the need for file indexing more rigorously than would be possible with the cardiac system.
6. CONCLUSIONS
The system described above has proved valuable to all concerned. The medical staff have computer files of clinical data on their patients and there has been valuable feedback on the design and implementation of the software. The Cardiac Information System could be modified to handle any other clinical area simply by providing a different set of names/abbreviations - and of course changing any data vet facilities to match the requirements of the new system. In this connection it is worth commenting that the CODIL interpreter will run on almost any ICL 1900 computer, has been transferred to a CDC 6600, and should run on most mainframe systems with the minimum of alteration.
The next stage in this research is to examine the use of CODIL in field conditions, both inside and outside the medical environment. Because of the success of the language in artificial intelligence type applications the approach may well have some relevance to diagnostic systems.
7. ACKNOWLEDGEMENTS
The work described here would not have been possible without the earlier pilot trials involving Dr. D. Orton, then of Hillingdon Hospital, and Messrs. Palmer and Marmion, then undergraduates of Brunel University. Christine Godfrey of the University Computing Unit carried out the thankless task of punching the forms and other colleagues, too numerous to mention, have given help and advice. In addition a Science Research Council grant covers certain aspects of the work.
REFERENCES
Posted by Chris Reynolds at 17:26