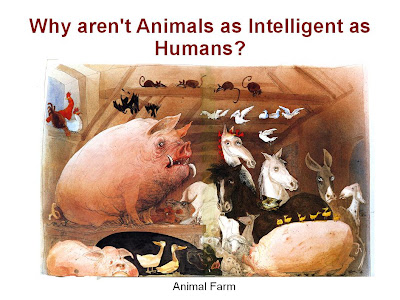 If we want to understand how the brain works, and how religions originate, we must remember that we are not independent observers and need to start by thinking "outside the box".There is no doubt that we believe that we are something exceptional, and many believe, or have believed in the past, that we are a special creation, living at the centre of the universe, and with an everlasting soul that distinguishes us from animals. Even those who have abandoned such views usually consider that we are supremely intelligent. Large numbers of scientists, and significant research funds, are currently dedicated to finding that special something that makes us unique. Despite all their efforts, there is still a black hole in our knowledge of how the workings of the neurons in the brain can be linked to our outwardly intelligent behaviour.

This talk suggests that the scientific establishment is actually looking for a non-existent "philosopher's stone" of biological intelligence, because they start from the viewpoint that, as what we do is exceptional, there must be something exceptional about our biological body. But if we look at how mammals have evolved since the dinosaurs died out we see that all have the same body plan, modified by changes in the relative sizes of organs, and the way that they are used. While our brain is bigger than average the overall changes in the body are far less than, for example, the dolphin, which has a larger brain. We must also be aware of the possibility that the neural code, like the bones in mammal forelimbs, is comparatively resistant to evolutionary change.

So this talk starts with the assumption that we have a bog standard economy version mammal brain which has been supercharged to give it significantly more capacity, and where a means has been found to fill the extra capacity by "speed learning" culture passed between the generations. Because brains are expensive organs to run, and to fill with knowledge, a key factor is the change in social structure, which ensures efficient education of the children while maintaining a just adequate birth rate to ensure species survival.

So what are the properties of the internal information processing language (the neural code) of a simple animal brain. Basically it must be able to save and recognise patterns of inputs from the sense organs and link them into a hierarchy of higher level patterns. It can also use saved pattern to "complete" partial patterns - triggering appropriate behaviours - such as eating or running away. In mathematical terms such a simple model is crude compared with the level of set theory (Venn diagrams) used to teach children in primary school, and at first sight it looks inadequate to support observed human mental activities. The way forward is shown by CODIL, a research project which looked outside the box and asked what a computer might have looked like if, 60 years ago, we has started by designing an inherently friendly electronic box which was easy for ordinary people to use, rather than a powerful mathematical tool for tasks which people found hard. This research suggests that despite its limitations the simple animal brain model should be capable of supporting at least a simple language for recording and processing cultural information, and possibly much more.

If we now look at the last 3 million years of human evolution we can map out a path, in which a critical stage is reached when an early form of language, coupled with increased volumes cultural information, becomes a significant survival factor, and the brain's capacity expands accordingly. In addition a change in the brain's "danger learning mechanism" could provide a means of high speed leaning - in a "What my teacher say is always right" mode.

At this point cultural learning takes off and evolution by meme becomes dominant - but because it overlays the bog standard animal brain's neural code the following limitations in human thought processes can be expected.
In expanding our animal brain to handle greatly increased amounts of information we have switched off some of the natural safeguards to allow more rapid learning and the above weaknesses have opened the door to the ready acceptance of fallacious information, such as religion and political extremism.

In preparing this talk I was unable to find any reference to other research that provided a model of the likely neural code in animals and then extended it to see what it predicted about human intelligence. If you know of such research I would be grateful if you could give me references in the form of a comment below.