Captured by the Camera - Portrait of an Owl-Man 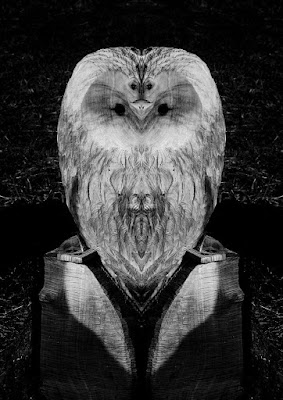 This picture was recently submitted to the Tring Camera Club competition for black and white prints. It was not selected as one of the top pictures - possibly it is not the kind of picture you would hang on your wall. Several people liked it and the only specific comment I got was that there was not enough contrast in the "face".

From my point of view its chief interest is that the picture says a lot about how the eye/brain combination works.

As presented here the eye immediately recognizes it to be a a face - admittedly one that you would only expect to see in science fiction films.The eyes are straight-forward enough and the lower patterns suggest an open mouth, with two prominent teeth and a narrow protruding tongue. The miniture face looking out of the forehead suggests the "Owl-Man" has extra senses directly connected to the brain.There is also something that could well be ears, and the face is clearly wearing  a jacket with white lapels ...

Of course it is just a modified picture of a chain-saw sculpture of an owl, currently for sale at College Lake, by Daryl Fryers (www.dfccarvings.com). 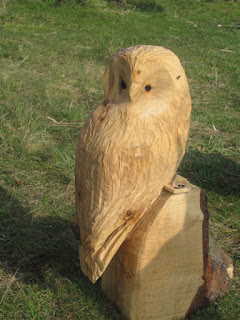 So how was the picture created?


The idea came after an earlier competition (Light, Abstract and Lines) had included some Photoshop type tricks and I decided to explore the equivalent facilities on my ancient copy of Photoshop Pro. The chainsaw carvings had just appeared at College Lake and it tried a reflection option which looked interesting - but not good enough to tray and enter it.  So I went back and took some more photographs - particularly of the owl shown in the picture on the left., moving ot to get a better angle and better side lighting on the "feathers."


I then took the right hand side of the picture, using the tip of the beak as a reflection point - trying several positions a few pixels apart for the biggest effect. The picture now looked like this image to the right - but is still quite clearly a carved owl on a block of wood.  I then converted to black and white and modified the contrast to darken the background and the parts in shade - and get a bit more contrast into the "feathers" carved in the wood, and the grain. The only specific touching up was to remove a couple of very light blades of grass from the background and transform was complete.


I believe that most people see this as the portrait of a science fiction monster - but it is possible to see it as a somewhat funny owl sitting on a block of wood.


[Note. I hand kept the original working pictures and I seen that the picture to the right differs by a narrow band two or three pixels wide from the picture at the top,]
Posted by Chris Reynolds at 17:18