Captured by the Camera: Ripples on a Duck Pond 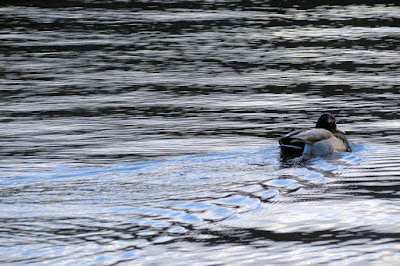 When you get an interesting idea for a picture the  result may be as a resulty of some careful planning - or just a bit of luck. The challenge here was a competition where the subject was "Light and Lines" and I decided I would try and get a picture with "natural" lines. On the day this was taken there was a strong wind blowing causing rows of parallel ripples in the water reflecting the sky - giving rows of dark and light ripple lines if you got the angle right.

The first location was on Startops Reservoir, near Tring, and I selected a wooden post  - with the ripples wrapping round it and giving a distorted reflection. However none of the pictures seem quite right so I moved to nearby Tringford Reservoir and tried again - this time with a collection of posts that had been a fishing stage. More pictures and none quite right . My final location was the canal at Little Tring. There were parallel ripples raised by the wind, at right angles to the line of the canal. In addition the sun was setting in a position where it shone straight under the bridge giving strong backlighting. Another batch of pictures - picking up the reflection of the bridge broken up by the ripples - but none really passed muster.

In fact the whole afternoon would have been a waste of time if it had not been for an incident. As I was preparing tp leave Tringford Reservoir a duck suddenly swam past me at speed. One click of the shutter and he was gone - but the above picture was the result.- I had got the foreground interest I wanted.

Because if the angle to the light the picture came out with very little colour - and all I did was to increase the contrast tp emphasize the bands of black and white. The blue colour was a real bonus and I am wondering if there was a patch of blue sky in just the right position.