Wednesday Science Limerick: Why MSG is added to food 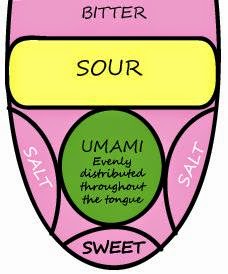 Your food can be bitter or sweet
You sense sourness or salt when you eat
While umami's the flavour
The taste that you savour
When something is really a treat.

Many processed foods contain monosodium glutamate (MSG) and on the packets it is sometimes described as a flavour enhancer.As someone who trained as a chemist I knew that it was the sodium salt of glutamic acid (2-Aminopentanedioic acid if you really want to know) and is one of the amino acids that make up the proteins in our body. However I had no idea why it was added, or how it worked, so I decided to have a dig around on the web - and found an exciting story about taste which I had never learnt at school.

I was brought up to think that our taste buds could detect four different tastes - sweet, sour, bitter and salt, and this was complemented by the sense of smell. However about 100 years ago a Japanese researcher, Dr. Kikunae Ikeda, was trying to find out why a stock made from the seaweed kelp improved the taste of many other foods. He found that the stock contained glutamate and that it provided a distinct taste. This 5th taste is now known as umami, which is a Japanese word (うま味) meaning "pleasant savoury taste" and there are special receptors in the tongue that react to the presence of glutamate in the food. It turns out that there are four kinds of taste receptors, each found in a different parts of the tongue. If you want to dig deep into the technical aspects see the Wikipedia pages on Taste Buds and Taste Receptors.
Posted by Chris Reynolds at 07:20