Firbush News, No 6. pp 26-30, July 1976
Recent [Artificial Intelligence] developments with CODIL
by
C.F. Reynolds, Department of Computer Science, Brunel University, England, U.K.
CODIL (1, 2) is a computer language designed for the non-mathematically orientated user with open-ended real-life information processing problems. Every attempt has been made to minimise mathematical sophistication of the basic language framework, and to find a processing algorithm and storage strategy simple enough to seem "obvious" to the proposed users. In achieving this goal many of the generally accepted features of computer languages - in particular the distinction between program and data - were abandoned as being too sophisticated. The resulting interpreter works by comparing strings of items and the basic algorithm is simple enough to be described on the back of an envelope. 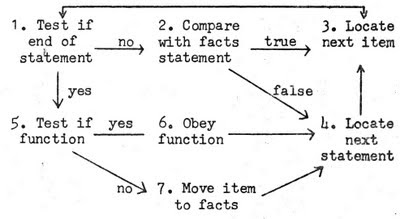