Children are better Scientists than Adults

The Scientific American has just posted an item More than Child's Play: Ability to think Scientifically Declines as Kids Grow Up describing research on 4 and 5 year old children at Massachusetts Institute of Technology and Stanford University.

In 1980 I had a problem. The university where I worked had just installed their first fully interactive computer service and I had the task of introducing 125 first year undergraduates (mainly about 18 years old) to the joys of computing. Many had never used a keyboard of any kind, some had studied computer science at school and a small number had their own home computers. Could I set an introductory piece of coursework which would not allow the budding computer geeks to show off in front of the others and scare off those who were nervous of the technology.

About a year earlier I had prepared a small demonstration package for a TV programme called Jim'll Fix It where children wrote to ask Jimmy Saville to help them to do something - and one eleven year old child had asked that a computer could help him do his homework.

I adapted and extended the package (which was written in CODIL) two include a number of additional games and data bases and the course work was:

FIXIT is a package designed for an eleven year old but it has some problems. Try it out and write a two page account of what you found.

Psychologically this worked well.  Even novices did not want to be beaten by a package for an eleven year old, while the need to write a critical account in English gave some of the budding computer whiz-kids a bit of a headache - as they had come convinced that computing was all about writing programs in BASIC.

Afterwards I gave a debriefing session to explain the significance of different "games" in the package to different sections of their future studies - and I also discussed some of the limitations of the package - especially the ones none of them had spotted. For instance FIXIT contained information on a number of British Birds and if you typed in the name of a bird it came up with some information about it. Not one of them discovered what happened if you typed in the name of a different kind of bird - i.e. a girl's name! The KINGS section asked you to type in a date and it told you the English King at the time and a number complained that they would have liked to be able to type in the name of the king and be told his dates.  Of course any eleven year old would have tried it, rather than complain, and would have found that it worked!

To me it is obvious that as we get older we organize our knowledge into mental boxes and the more we cram in the more reluctant we are to ask questions which fail to conform to our mental models.
Posted by Chris Reynolds at 07:45 No comments:

How ICL came to axe the CODIL project

On the 3rd of May 1968 John Aris, who had worked on Leo Computers, was then Manager of Applied Systems in English Electric Computers, and later Director of the National Computer Centre wrote: about a new research project called DORIS (later renamed CODIL):

DORIS, a 'Data ORiented Information System', is an original and radically new; approach to the systems/programming of computers, devised by Dr. C. Reynolds of this Department. It involves holding a large proportion of the decision-making logic, normally built into user programs, as part of the data files, and analyzing it not with a variety of special applications programs, but with one general purpose decision making routine. If this proves viable it could result in the virtual demise of the conventional application program in many fields, replacing it by the said general purpose routine and groups of calculation routines. Its data structure, being closer to the ordinary modes of human thought than computer files generally are, could allow the ultimate user far greater freedom to use the computer as an information handler in a familiar way, and without the need for expensive commercial programmers. This would, among other advantages, ease the implementation of management information systems. A further important consequence could be a new approach to CPU design.
Read more »
Posted by Chris Reynolds at 15:13 No comments:

Review: The Origin of Our Species – by Chris Stringer 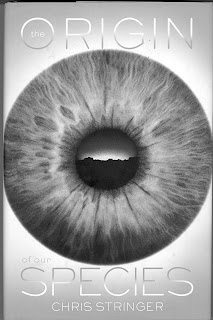 As a young man I was very interested in the caves of Devon, and the early work of the Victorian archaeologist William Pengelly in Kent's Cavern, Devon, so I was delighted to learn that human bones from this cave have now been shown to be about 40,000 years old and hence among the oldest homo remains found in Europe. Fifty years later my interests in human-computer communication have widened in an attempt to understand the evolution of human-human communication and I needed a crash course on what is currently known on the subject.
Read more »
Posted by Chris Reynolds at 20:53 No comments:

Voices of the Deep - Marine mammals and the cost of language

I have just seen the BBC film Voices of the Deep, which is part of the BBC Ocean Giants series currently available on I-player. and the shoot of, for example, the different ways in which individual pods of orcas (killer whales) catch their prey clearly shows a high degree of culture. Other recent items I have seen on line include research into Dolphin language  and the following video on Youtube which showed how orcas could disable and kill the Great White Shark

Read more »
Posted by Chris Reynolds at 17:13 No comments:

Escaping from the Box – The Dartington Experience

Dartington Hall School was one of the most progressive schools anywhere in England and between 1952 and 1956 I found myself way outside the conventional educational “box” as a pupil there. At the reunion a few days ago there was much discussion about old times and also the effect that going to such an unusual school had on one's career. I was one of the pupils that Bill Curry (the headmaster at the time) rescued from the evils of conventional education In discussions I said I would write something of my experiences - and I am doing so here because the observations are very relevant to the way we all become trapped by the mental, physical and social boxes we grow up in.
Read more »
Posted by Chris Reynolds at 17:08 8 comments: