Some interesting footprints on the beach.

There are major difficulties in investigating human history immediately before the coming of agriculture some 10,000 years ago because of the lack of evidence for early fishing villages along the coast lines of the world. The problem arises because during the last ice age sea levels were 100 metres or more below the current levels and this would suggest that any remains could be buried deep underwater. A recent discovery of footprints in the sand said to be about 13,000 years old suggests that there is one place where evidence has been preserved at sea level. 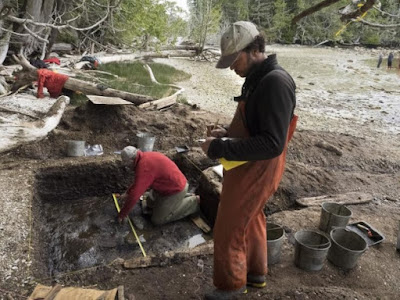 ﻿
The place is Calvert Island, British Columbia, and earth movements (presumably mainly due to the growth in the Rocky Mountains) mean that locally the sea level has only risen by a few metres since the Ice Age low. In addition the fact that humans appear to have been on the island at the time suggests that they had sea-going boats. I look forward to future developments from this site - but unfortunately the realities of plate tectonics means that there are not going to be similar sites in Europe of Asia.
Posted by Chris Reynolds at 17:14 No comments:

The need for a Symbolic Brain Language

I am currently drafting a detailed paper modelling the evolution of human intelligence and a key part of the work involved the definition of a "symbolic brain language" which shows how information is stored and processed. The following draft section explains the reasons why there is a difference between a conventional programming languages and the proposed brain symbolic language, and also explains why a simple approach should allow a complex system to be modelled.
Your comments on the following draft text would be appreciated.
Read more »
Posted by Chris Reynolds at 14:41 No comments:

Thoughts after completing "What is a Mind?" FutureLearn course


One of the problems with trying to relate the research I did in the 1970s and 80s to the evolution of human intelligence is that it involves many different specialist disciplines. Even if I was 50 years younger I would have difficulty in becoming up-to-date with all the potentially relevant recent research.  The "What is a Mind?" course was run from Cape Town university and perhaps was too philosophical for my liking but I found it useful, as did many other students. I deliberately set out to learn - rather than push my own research - and found discussions with people with many different specialist backgrounds (or none) most stimulating.

Read more »
Posted by Chris Reynolds at 19:14 No comments:

Email ThisBlogThis!Share to TwitterShare to FacebookShare to Pinterest
Labels: FutureLearn, What is a Mind

Trapped by the Addiction Box

On of the interesting side effects of doing the online Futurelearn course "What is a Mind?" is that one gets most interesting links in the discussion. I found the article The Likely Cause of Addiction Has Been Discovered, and It Is Not What You Think really makes you think about the subject - and makes one wonder if Western society has wrongly diagnosed the addiction problem - and has got addicted to punishing addicts! I thought the research on rats very revealing. And I can think of some human friends who "went wrong" and never seriously worked again because they were treated as criminals who nobody loved.
Posted by Chris Reynolds at 08:34 No comments:

Point of View Affects How Science Is Done

I have just discovered the article Point of View Affects How Science Is Done which was published by  Douglas Medin, Carol D. Lee and Megan Bang last September and find it interesting from a number of points of view.

In suggesting that Gender and culture influence research on a fundamental level it uses as examples studies of social relationships in primate groups and how male and female observers have noticed different aspects of what the animals they observe are doing. This suggest that in considering how the human brain has evolved one must be careful about how one thinks about the effects of human society when making comparisons with both primate societies and those of surviving hunter-gather groups.

The ideas are also relevant to the problems I had developing CODIL in the 1970s and 80s - as described in Algorithms aren't everything. The problem I had were that those working at the forefront of the computer industry considered themselves to be a particularly intelligent elite ("you have to be clever to be able to program a computer") designing systems for the slow-minded plebs. In contrast my approach was that ordinary people understood what they wanted to do - and that to help them you needed to be humble and start by assuming they knew more about their wants than you could ever know. This made it difficult to get support for my work from the computing establishment.

Posted by Chris Reynolds at 05:50 No comments:

The brain is really flexible

It says a lot about the adaptability of the brain, and how it can wire itself
up in unusual circumstances just to watch how these 7 year olds can work
together, and share information. for instance if one watches the TV the
other can also "see" it
Posted by Chris Reynolds at 07:59 No comments:

A clue about how humans domesticated wolves?

A most interesting article has just been published which shows wolves, which could eat gelada monkey infants hunting among gelada monkey herds without alarming the monkeys - although the monkeys would take appropriate action if different predators appeared. It would seem that the wolves see a benefit in hunting rodents if the monkeys are around, and if something similar happened in early human society it could well lead to domestication of the wolves. The article noes not indicate what benefit the monkeys get from the arrangement - but presumably there is some advantage.

Details of the article:

Mixed-species associations generally form to increase foraging success or to aid in the detection and deterrence of predators. While mixed-species associations are common among mammals, those involving carnivorous predators and potential prey species are seldom reported. On the Guassa Plateau, in the Ethiopian highlands, we observed solitary Ethiopian wolves (Canis simensis) foraging for rodents among grazing gelada monkey (Theropithecus gelada) herds. The tolerant and sometimes prolonged (> 1h) associations contrasted with the defensive behaviors exhibited by geladas toward other potential predators. Ethiopian wolves spent a higher proportion of time foraging and preyed more successfully on rodents when among geladas than when alone, providing evidence that gelada herds increase the vulnerability of subterranean rodents to predation. Ethiopian wolves appear to habituate gelada herds to their presence through nonthreatening behavior, thereby foregoing opportunistic foraging opportunities upon vulnerable juvenile geladas in order to feed more effectively on rodents. For Ethiopian wolves, establishing proximity to geladas as foraging commensals could be an adaptive strategy to elevate foraging success. The novel dynamics documented here shed light on the ecological circumstances that contribute to the stability of mixed groups of predators and potential prey.
Posted by Chris Reynolds at 16:49 No comments:

In trying to model the human brain's basic mechanisms, and how it's evolution can be explained it is important not to be overwhelmed by some of the numbers involved. One approach, which is adopted in other models of other large problems, is to stop worrying about how big the numbers are and simply to assume the number approaches infinity. You can then assume that building a complete model that tries to reproduce everything that might be happening is impossible, and concentrate on looking for simplifying generalizations.
Read more »
Posted by Chris Reynolds at 20:15 No comments:

Could Chimpanzees Learn to Cook

I was intrigued to see an article on the BBC web site under the title Cooking skills may have emerged millions of years ago with a link to the original paper Cognitive capacities for cooking in Chimpanzees (unfortunately behind a pay wall). The subject raises an interesting question - as a more primitive action to cooking related to storing food for use later, or processing it in some way. I am wondering what the first archaeological evidence for such activities. For instance, when did the preparation of dried food - either fruit, meat (biltong) and fish really begin?  Does anyone know?
Posted by Chris Reynolds at 10:02 2 comments: 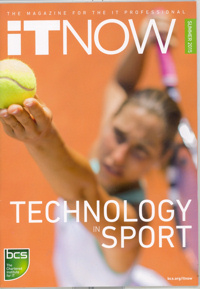 
Chris Reynolds FBCS follows up on Chris Yapp's Future Tech  post 'The Limit of Algorithms' by looking at how that the explosive growth of the computer industry may have led to unconventional research on how people process information being abandoned.