What is so hard about research?

Jody Passanisi and Shara Peters have recently posted a guest blog on the Scientific American entitled What is so hard about research? which looks at the problems of getting students to think imaginatively about research and the available research tools, and commenting that they tend to look for quick and easy options rather than stop and think about the problem. In reply I have posted the following comment.
Read more »
Posted by Chris Reynolds at 18:24 No comments:

Do Prairie Dogs have a sophisticated communication language 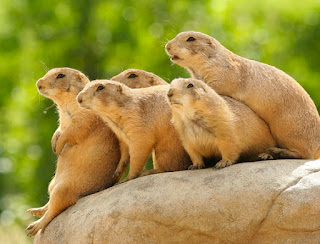 In trying to model the neural code in human and animal brains one of the key factors to be considered is that of language and whether the biological foundations of human language are significantly different to other animals - or just an existing feature stretched to a significant extent - rather like a giraffe's neck. is a stretched version of a "normal" mammal neck. My own feeling is that virtually all our language is a product of culture - and the more rapidly a brain can absorb culture the more sophisticated the language can become  - in something akin to an autocatalysed chemical reaction.


I am therefore extremely interested in the work of Professor Con Slobodchikoff, as described in Animal Behaviorist, with video, at TheAtlantic.com. Experiment show that not only do their calls distinguish between different threats, but that the calls appear vary to convey additional information - distinguishing between, for example, between a tall human in a blue shirt and a short human in a yellow shirt. It addition there are complex "chatter" between individual prairie dogs which the researchers have no idea how to interpret, different groups of the same species living in different places have different dialects of the "same" language, while different species appear to use different vocalizations.
Following a holiday and other distractions I am about to return to drafting my detailed notes on the evolutionary implications the ideal brain model (see From the Neuron to Human Intelligence: Developing an “Ideal Brain” Model). Research such as this, which suggests that we have underestimated the ability of animals to communicate with each other, makes it much easier to argue that our brain works in the same way as the brains of many other animals - except that ow brain has adapted to handle large quantities of cultural information.
Posted by Chris Reynolds at 16:10 No comments:

Looking back Half a Century on some Holes in the Ground.

Between 1959 and 1962 I was studying for a Ph.D. in Chemistry at Exeter University, but spent much of my time on a different activity - exploring the limestone caves in Devon. I became Secretary of the Devon Spelaeological Society and was involved in the purchase and early work on an important geological and biological site - Higher Kiln Quarry, Buckfastleigh. However my grant ran out in September 1962 and as I needed an income I took a job in Hertfordshire. This meant that I just missed out on the creation of the William Pengelly Cave Studies Trust.

A week ago the Trust reopened a refurbished museum and held their 50th AGM - so I decided to take a holiday revisiting Devon and get to know more about what had happened.over the last 50 years.  So I went to Buckfastleigh to attend the reopening of the museum - and to enjoy a celebration meal at the Cott Inn, Dartington, after their annual general meeting. I was also interested to see some old films showing what had happened in the last 50 years.

However the contact with the Trust reminded me of some unfinished work from the 1960's. While I was supposed to be studying chemistry I actually made some detailed notes relating to the formation of caves, particularly in the Buckfastleigh area. However the work was never finished as I was to busy earning a living and raising a family. As a result the bulk of my observations were never published.

There was one notable exception. In about 1960 I visited a cave in Cheddar Gorge, Somerset, which was being explored by the Mendip Caving Group, and wrote up an account of the deposits there. I was contacted for more details by an archaeologist in the mid 1990's and, based mainly on my observation, a Time Team programme was broadcast in 1999. As a result I tidied up my original notes, did a literature search on later developments and published a detailed paper, Cooper's Hole and the Cheddar Master Cave, in the Pengelly journal, Studies in Speleology, Volume 17. The photo shows  Malcolm Cotter (in the green boiler suit) and me being interviewed and comes from the book Behind the Scenes at Time Team, by Tim Taylor (photos by Chris Bennett), published in 1998, which contains an extensive account of how the programme was made. Cooper's Hole can be seen in the background.


My renewed interest in the caves, and in particular a look at some of the exhibits in the museum, has reminded me about my unpublished notes - and in particular the need for lateral thinking in understanding how the caves formed. I therefore took the opportunity to make contacts to see if I can get some photographs taken of some important geological features - mainly relating to the shape of the roof of cave passages and chambers. There is no way, at 75, that I could safely re-enter the caves, and such pictures will help me to document my original notes in a scientifically usable form. The result could well be a couple of serious papers - plus further information which I could well publish on this blog.
Posted by Chris Reynolds at 07:50 No comments: