A Cat trapped in a box 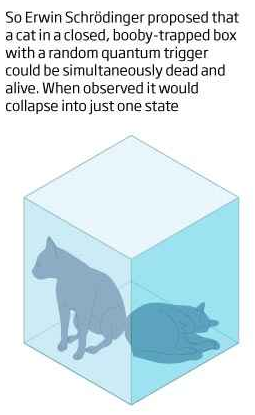 I was most amused by the following story in this week's New Scientist:

An Indian science textbook has been recalled after complaints that it gives details of how to kill kittens. The offending passage read: "Put a small kitten in each box. Close the boxes. After some time open the boxes. What do you see? The kitten inside the box without holes has died."
An important lesson on the proper storage of air-breathing mammals - but how very Newtonian! As any quantum physicist will tell you: the kitten can survive indefinitely as long as you don't open the box.

Takes me back to my time as a student having to learn about quantum mechanics - and was interested enough to do a Ph.D. in Theoretical Organic Chemistry.

Posted by Chris Reynolds at 15:44 No comments:

Is this what "America First" really means ...

This political cartoon from 1941 sums up my feelings about Donald Trump's attitude to refugees and the rest of the world. I had not realized that the slogan "America First" comes from a 1930's U S movement that supported Adolf Hitler or that before Pearl Harbour the US was reluctant to take refugees from Nazi Germany.

One of the reasons this blog has been quiet recently is that a combination of things - including health issues - have left me rather depressed - and work on a paper on the "Evolution of Human Intelligence" has been delayed - perhaps because one of the conclusions is that humans aren't really that intelligent and that the inherent weaknesses of our brains predict serious failures in societies which fail to fairly share resources between their members.

This cartoon makes me realize that I will get nowhere if I try and hide from the political reality of the world around me. I have therefore decided that while I must get back to my research I need to let off steam about the way we are all trapped by political boxes which are beyond our control.
Posted by Chris Reynolds at 18:41 No comments: